In 2016, a total of 93.85 million light-duty vehicles were sold worldwide, an increase of 4.7% year-on-year, and have maintained steady growth for seven consecutive years. Relying on the healthy development of the entire automobile industry, the auto parts industry has also achieved steady and healthy development. The output value and profit level have been higher than the entire vehicle industry for many years. At the same time, under the trend of â€œlow-carbonization, intelligence, and informatization,â€ the global auto parts industry is actively making strategic plans for the future. 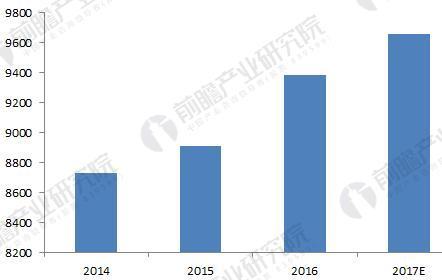 As the global resource allocation model of the automotive industry matures, major auto parts companies have accelerated the pace of global deployment. The production and R&D bases of major component giants are gradually extending to all corners of the global automotive market. According to the latest statistical data, most of the top ten parts and components companies have more than 100 production bases, most of which cover more than 30 countries, and have built technology R&D centers in major auto markets such as North America, Europe, and Asia-Pacific, so that they can effectively carry out Technology R&D work that fits local consumer demand.

Exhibit 2: Dynamics of Globalization of Typical Foreign-Owned Component Enterprises in 2017 (I) 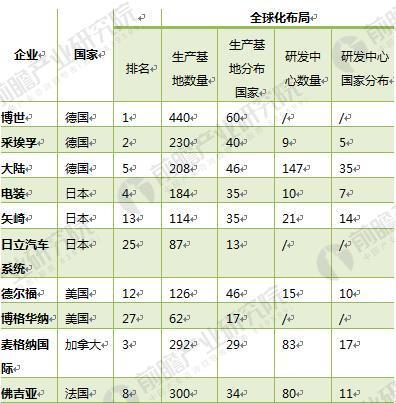 Exhibit 3: Dynamics of Globalization of Typical Foreign-Owned Component Enterprises in 2017 (2) 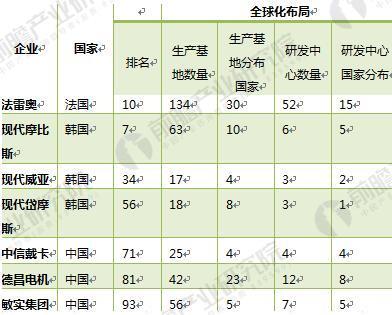 2. Significant increase in sales of top 100 companies and fine-tuning of market structure 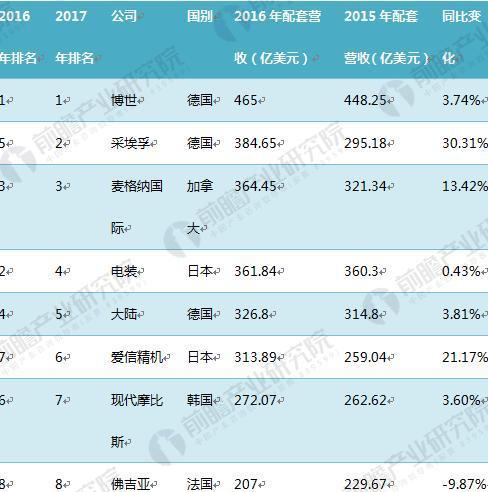 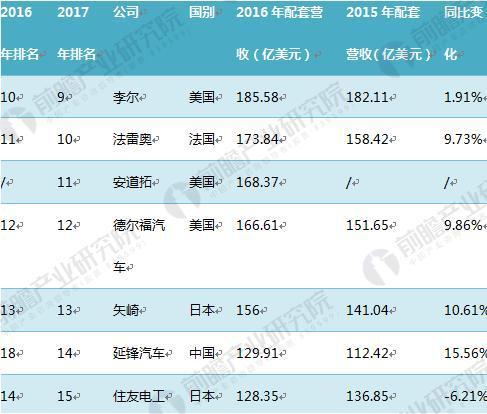 Among the top fifteen companies, Bosch continues to firmly occupy the top spot and remains the only company with annual sales of more than US$40 billion, reaching US$46.5 billion; ZF rises from the fifth year of last year after the acquisition of TRW. In the second place on the list, Magna International ranked unchanged with the previous year's ranking, while Denso fell out of the top three and ranked fourth; the mainland fell one place, ranking fifth. The sixth to tenth rankings are only slightly fine-tuned, followed by Aisin Seiki, Hyundai Mobis, Faurecia, Lear, and Valeo. 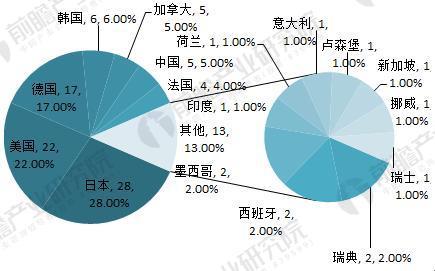 It is worth noting that Chinese companies have made remarkable progress in 2017 and have achieved encouraging results. This is the first time that China has five companies appearing on the Top 100 list at the same time. From top to bottom, Yan Feng (14th), Innafa (66th), CITIC Dika (71st), Johnson Electric (No. 81) and Minth Group (No. 93). Yingnafa and Minth Group all entered the Top 100 for the first time. Dechang Motors returned to the top 100 two years later. Yanfeng and CITIC Dicastan ranked higher than the previous year, rising by 4 places respectively. 6 bit. Yanfeng was the first Chinese company to enter the top fifteen ranks, ranking 14th, which also refreshed the top ranking of Chinese companies in the top 100 list.

Although overall, the overall profitability of auto parts suppliers has remained high and higher than that of the entire vehicle industry in recent years, but from the individual perspective, due to the regional, company size, product focus, business model, etc. Affected by the factors, the financial performance of different auto parts companies is uneven, and the profit rate varies greatly: 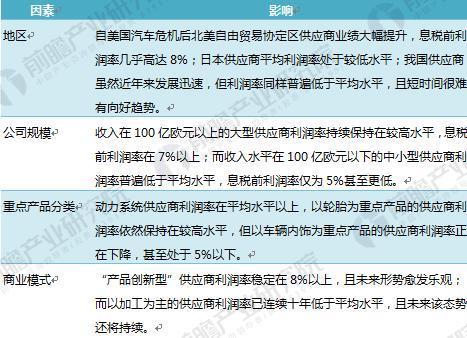 The major parts and components companies have always attached great importance to technological R&D and innovation. Fundamental elements such as capital, talent, and equipment have invested heavily. Most companies in Germany, France, the United States, Japan, and other countriesâ€™ giants account for 5%~10% of their sales of R&D funds. In Korea's sub-developed regions, the proportion of R&D funds of their core component companies is mostly 0.8%. % to 4% (see Table 2). The average R&D capital investment of China's spare parts enterprises is even lower. Except for a few large-scale parts and components companies, most R&D investment ratios are below 1%. 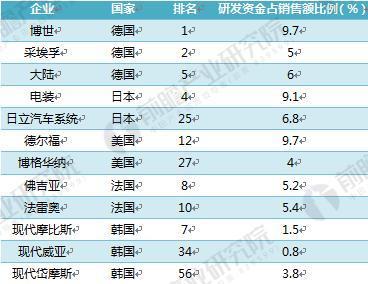 In recent years, the world's major component giants have made great achievements in research and development through high R&D investment. They have maintained their leading position in the industry for a long time and continued to occupy the technical commanding heights in various market segments. For example, in the power system, Bosch successfully completed research and development of major power technologies such as the â€œhigh-pressure diesel common rail systemâ€ and â€œ48V hybrid power systemâ€, which greatly improved the fuel economy and emission cleanliness of the powertrain system; Delphi successfully released 48V lightness. The hybrid system makes the fuel economy of the vehicles equipped with the system significantly improved; the electric equipment has completed the research and development of the engine ECU (ABICORE) technology, the improvement of practical fuel efficiency technologies, and new power control unit products represented by inverters. . In terms of electronic control, Denso successfully completed the research and development of "Pico Grid System" pico-grid system, driver support lighting and other technologies.

The above analysis and data come from the Forecast and Analysis Report on the Depth Market Research and Investment Prospects of the Chinese Auto Parts Manufacturing Industry in 2018-2023 issued by the Industry Research Institute.